«Unknown Mossolov» concert in the Grand Hall of Moscow Conservatory 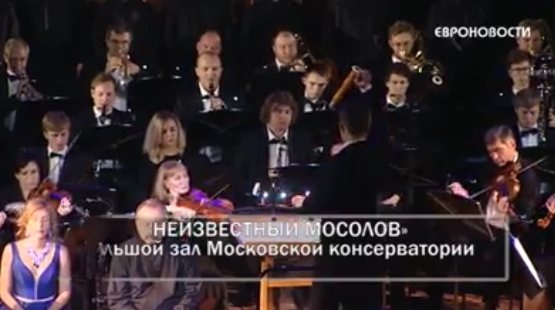 The third stage of the project “Russian Composers’ Heritage Revival”, devoted to the avant-guard composer Alexander Mossolov, finalized with the grandiose concert  in the Grand Hall of Moscow Conservatory.
The main hero of the event was Symphony orchestra of radio “Orpheus” led by Sergei Kondrashev. The ensemble played unknown and rarely performed works of Mossolov, including the composer’s most famous piece - the symphony poem  “Factory. Music of Machines”. The culmination of the concert was the world premiere of the monumental “Symphonic poem”, during performance of which two choirs - State Academic Moscow Regional Kozhevnikov Choir and Academic Choir of Russian song of radio “Orpheus” - joined  Symphony orchestra. “Symphonic poem” by Alexander Mossolov is the musical chronicle of the era of destruction”, - says Sergei Kondrashev.

The music of the avant-grade composer who was in deep disgrace for many years really impressed the audience.

“Unknown Mossolov” is the third season of the large multimedia project “Russian Composers’ Heritage Revival”. The project is based on the rarest score editions and manuscripts found in the library of radio “Orpheus” which was set up in 1928. Thanks to the sponsor’s support of PJSC “Unipro” we are able to restore books, digitize them and make audio CDs. Each project season ends with the concert in which the restored scores turn into live music. In the next season we will acquaint our listeners with the creative heritage of the composer Leonid Polovinkin.